Here at LeafFilter, we have the privilege of helping homeowners solve their biggest problems. We love nothing more than to hear how our product has eliminated the dirty, disgusting task of gutter cleaning, or eased someone’s worry about how to protect their biggest investment – their home – from damage. We recently had the pleasure to catch up with one of our valued customers to see how life after LeafFilter is treating him.

His name is Victor, and he lives in a heavily wooded area in North Carolina. The pine trees, with their pesky needles and thick pollen, had become a huge problem. His area of the state has also recently begun to experience more intense winter weather, as opposed to the mild winters Victor was used to when he moved to the area over a decade ago. And, as if that weren’t enough, Victor also had trouble thoroughly cleaning his gutters due to some landscaping around his home, which made it hard to maneuver the ladder. All these factors created the perfect storm – Victor was fed up, and wanted a solution that would eliminate gutter cleaning.

He’d already seen what plastic DIY gutter guards could do – they were already in his gutters, and he had to clean around them multiple times a year just to keep the water flowing through his system. They were a pain, especially with the heavy debris that would accumulate in his gutters season after season. “I’d tried to clean it several times because of all this small debris that would get through these holes,” he says.

“It was like a 2-3 inch thick layer of mud,” he describes it, “And between the pine pollen and the pine needles, it would be like this sludge that would accumulate in the gutter, especially around the downspouts.”

So, in his pursuit of clean gutters, Victor tried a gutter cleaning tool he found one day called a Gutter Scoop, but it didn’t work very well. With limited access to water spigots and power outlets, Victor also knew using a power washer or electric leaf blower was out of the question. He was running out of options.

The roof was too pitched for him to safely clean the gutters while perched up there, so the only workable solution for Victor to tackle gutter cleaning was to use a ladder to reach the gutters. With his rows of beautiful azalea bushes, Victor had to be careful not to trample his landscaping.

“I had trouble fitting the ladder in there, and I could only reach a couple feet on either side, so I’d have to move the ladder again and again. So, not only is it a very messy job, but it’s also a time-consuming job. It would take a couple hours every time,” says Victor.
And then disaster struck. 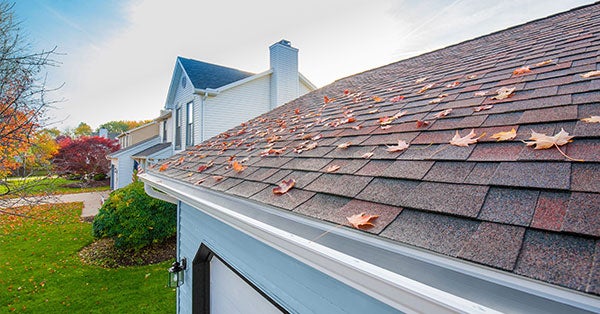 As Victor describes it, “A few years ago, it was raining really hard. One day, it was so bad, the water was pouring over the gutter, and it was eroding away the dirt below it. So, I got up there, and I was cleaning it, and the ladder was wet, and I missed the last rung. And I slipped off and went *pop*! I have two bad knees, and one of my knees popped out. I was limping for several days because of it.”

Victor lost precious time enjoying retired life after his 43-year-long career working hard as an Operating Room Nurse. Sometime later, he came upon a LeafFilter booth at a local festival and the rest, as they say, is history. Victor had the product installed right away, and has been enjoying LeafFilter’s many benefits.

“It’s one less project I have to do around the house, one less thing I have to take care of. So, you know, it helps,” he says. “You don’t realize how bad [the gutters] are until they start backing up and quit draining. So, I’ve been really happy with [LeafFilter] because it keeps me from having to do one more chore around my house every few months.”